I am pleased to share that three of my poems appear in the 2019 American Writers Review, a multi-genre literary journal published by San Fedele Press and now available on Amazon in both book and Kindle format.

The titles of my published poems are “The Sidewinder,” “Futility,” and “Cycle.”

It’s an honor for my poems to appear alongside the work of so many other wonderful writers from around the world.

Then the universe began sprinkling clues like breadcrumbs, and once I started paying attention to them, I accumulated over ten pages of signs…

And Dublin trip number four is booked for July 2018, my celebratory victory tour, so to speak.

Over the course of the past three years, I devoted countless hours and days to crafting the story of Kelly Lynch and her friend, Shannon Moran. I ultimately surprising even myself as my initial story idea took off on its own, unique course, and held its own through fruition.

All of a sudden, I wrote the last word without even realizing it at the time that it was THE LAST WORD.

I burst into tears as I realize that the draft was technically done.

An intense round of editing followed over the course of the past few weeks, and now?

And I cried tears of joy again.

CHAPTER ONE, a novel by Jill Ocone, is finished. Complete.

How does it feel?

It’s very hard for me to describe how I feel, other than it’s an awesomely overwhelmingly satisfied sense of accomplishment.

I set out to do something, and I accomplished my goal. I mean, I REALLY DID IT.

As I crafted a story that the universe brought to me, a story that needed to be told, I learned a lot about myself in the process. I accepted who I am, just like how my main character, Kelly Lynch, learned to accept herself.

I also know that there are many more words to be strung together and stories to tell.

Above all else, I learned that I am, indeed, a writer, just like Kelly Lynch learns in Chapter One.

There’s a litany of thank-yous to come, but I must thank my spirit guides, Tara (Hey, You!) and Nick (You, Too!).

Chapter One is for you both. Thanks for guiding me along this spectacular journey.

I have begun reaching out to literary agents and publishers with confidence that the universe will lead me to the right opportunity to take Chapter One to the next level.

And if nothing ever comes of it, no worries. I fulfilled my destiny as dictated by the universe and will trust the journey, no matter the outcome.

Dublin is calling again, and I must go…

I’ve been plugging along over here this week making CHAPTER ONE come alive. I typed like a madman as Kelly Lynch’s life really took a turn into darkness. I accomplished my goal of completing Chapter 7, which wraps up Part 2 of CHAPTER ONE (aptly titled Death, or The Present). I shared the format of CHAPTER ONE last week, so if you’d like to take a look at that click here.

Part 3 of CHAPTER ONE is titled Rebirth, or The Future, and Chapters 8 and 9 will be set in Dublin, Ireland.

I’m now taking a break from novel writing and from reading anything related to James Joyce until I return home. I want to experience Dublin with an open mind as I look through Kelly’s eyes, as Dublin will change Kelly’s life as it did mine. A few of the Dublin locations Kelly needs to visit are the James Joyce Tower in Sandymount, Bewley’s Oriental Cafe on Grafton (crossing my fingers that renovations are complete), and wandering around Dun Laoghaire and the Temple Bar and Trinity College/Grafton locations. Other than that, I’m looking forward to going wherever the universe intends to send me.

I’ve grown to have a very personal relationship with Dublin over the past three years without intending to. With the help of my spirit guide’s direction, Dublin has helped me find ME. Even though I’m less than 1% Irish (hey, at least it showed up in my DNA test!), Dublin has come to be a part of my identity, my journey, and my purpose. I’m extremely fortunate to have a wonderful friend who is up for anything accompanying me (again! Thanks NOD!). Dublin or bust!

As I am about to embark on the second leg of my “mission from the universe,” I urge you to look for the signs and callings in your own life. If you are quiet enough, you’ll eventually see them. Take a step forward today and begin your own journey of self-discovery. It’s truly amazing.

Thank you for following my journey! Stay turned for tales from Dublin, hitting your browser later this month!

Wow. I just figured out that since my last post on July 17, there were only four days that I didn’t write. On the days when I did write, I worked for two hours or more as I continue creating the story of Kelly Lynch and the impact her friend, Shannon O’Shea, had on her life.

The novel’s title is now official. It is called CHAPTER ONE.

The format of CHAPTER ONE is as follows: 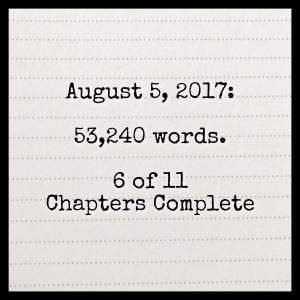 I am very pleased to announce that I am now finished through Chapter 6. My goal is to finish writing Chapter 7 next week, then leave writing Part 3 for after I return from Dublin (Chapters 8 and 9 are set in Dublin).

One year ago, Kelly was only a nameless idea. Now that she’s her own entity with her own voice, I’ll be looking at Dublin locations through her eyes, not mine, when I venture there in ten days.

CHAPTER ONE has a few recurring themes, one of them being the idea of escaping versus living. This completely unintentional theme developed on its own through Kelly’s reaction to events that shaped her life. She’s still not aware of the importance of this lesson, however, but she will be by novel’s end.

At times, Kelly’s story has gone in completely different directions than what I initially envisioned, developing its own timeline and themes instead of keeping to its original script in my head. And that’s been exciting. Even today, when I finished Chapter 6, I had to go back and revise Chapter 1 because of a turn the story made on its own.

The plot board I created that I wrote about in my last post sits there, initially useful in guiding the story, yet  now a relic of the past. As Kelly’s story moves forward, the plot board will remain a treasured souvenir of my writing process and of this summer.

I’m falling in love with Kelly Lynch. When CHAPTER ONE is finished, I hope that someday you’ll have the chance to fall in love with her, too.

Thank you for following my journey!

I love today’s date: Seven One Seven One Seven. It’s the perfect date to begin updating my progress towards completing my first novel, tentatively titled Chapter One.

I’m pleased to announce that I finished Part One today without meaning to! I had no intentions of ending Part 1 where I did, but when it works and when my spirit guide says so, I listen.

There will be three parts to the novel, along with a prologue and an epilogue. I don’t want to give away any details just yet, but I will share that the main character’s name is Kelly Lynch, and her friend is named Shannon. Suffice it to say that Dublin plays a major role in Part Three. When I return to Dublin in less than a month, I’ll be able to look upon key sights through Kelly’s eyes. 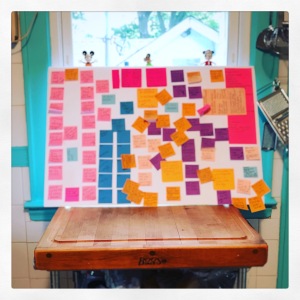 Plot Board for Parts One and Two (blurry on purpose)

I created a plot board for all three parts. Having everything right in front of me on one board versus on several pages in a notebook has been an immense help. One of my goals, in addition to making solid progress on the novel, is to transform my so-called “Room of Doom” into a writing area, where I’d be able to display the boards all the time.

This whole journey has been a labor of love. If you are interested, head over to my personal blog SoulSEAker and check out my posts from August 2016 and September 2016, and you’ll get a glimpse as to the roles my spirit guide, the universe, and the city of Dublin have played in my journey so far.

I’ll be reserving this blog to post updates about my writing life, including the novel, my freelance magazine work, and my poetry. My goal is to blog about my progress once to twice a week. For more personal posts, please visit SoulSEAker anytime.

So glad you have chosen to read this update! I hope you continue to follow both my journey and the story of Kelly Lynch as it unfolds…

New issue online over at jerseyshoremagazine.com ! I wrote four articles and provided editorial work/content. Enjoy!
It’s RELEASE DAY!!!!! Order your copy today!!!!! So excited to be a part of this anthology!
What’s that? My piece “SynJersey” was selected for publication in this awesome anthology?!?!? New post today over on my website with links to purchase. See bio for links!!!! #amwriting #published #staysalty #writer