What I love most about our gift is that I also get a season pass, which allows me to spend time with them at the park several times a year. Each visit is special to me because it’s our thing, and it’s a great way to help provide a break for my sister-in-law and brother-in-law. If I had a nickel for how many times we laughed together or for each memory we made or silly story we told, I’d be a millionaire by now.

Nephew knows more about Six Flags rides and parks than anyone I’ve ever met. He can tell you when a ride made its park debut, who built it, who designed it, and what park received the ride it might have replaced. He understands the physics and design elements that goes into building a ride and if you ask him what park in the United States had the first looping roller coaster, he will know the answer.

When it comes to actually going on the rides, Niece is fearless and she will go on anything.  Meanwhile, Nephew and I have a similar sense of moderate adventure and we tend to stick to the middle-of-the-road rides and coasters, then when we are ready, we’ll attempt riding a more extreme one.

Our favorite ride is Skull Mountain, which is a fun, little inside coaster that operates in the dark. Two summers ago, Nephew and I set a personal record for going on Skull Mountain 22 times in a row, which took a little over two hours. We only stayed on the ride when the ride queue was empty five times; the rest of the time we got out and walked around. It probably wasn’t my best decision, in hindsight, since I flew to Dublin the following day with a splitting headache.

Our last ride conquests were Superman: Ultimate Flight and Green Lantern at the end of last summer. I was surprised how much I enjoyed the Superman experience, considering riders are face down to simulate Superman’s flight. We conquered Bizarro in April of 2017. Man, that one is fast! It’s like the Batman coaster after it had three energy drinks and a shot of super-charged espresso. Batman: The Ride has always been one of my favorites, and we conquered that one together in 2015 at Six Flags Great Adventure’s Holidays in the Park.

The coasters Nephew and I haven’t found the courage to ride yet are notoriously extreme, and we weren’t sure which coaster we’d be brave enough to conquer this year. 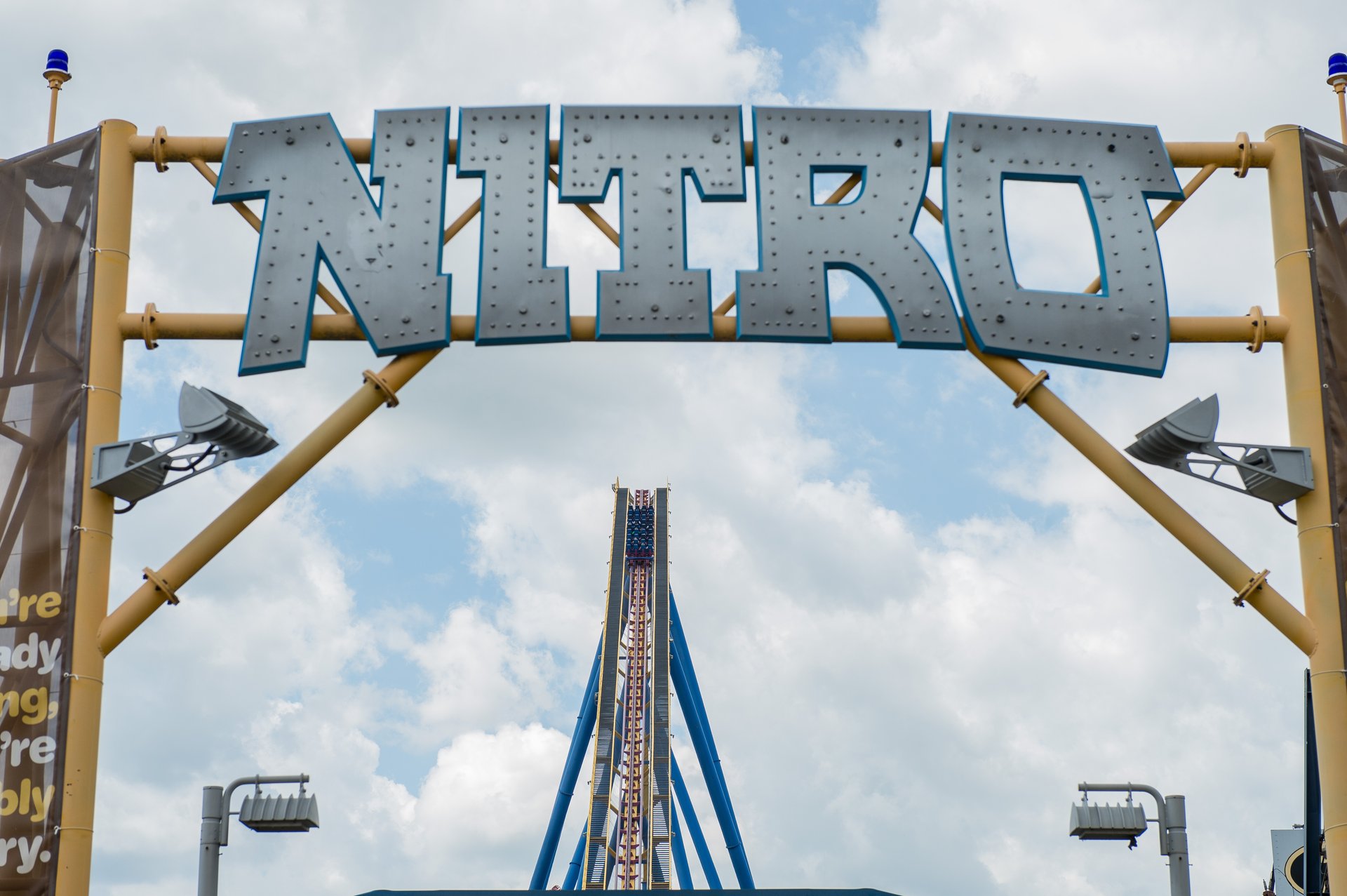 When Nitro opened in 2001, it was the tallest and fastest roller coaster in New Jersey (Kingda Ka stole those honors from Nitro a few years later). While Nitro does not have any inversions, it is 230 feet high at its peak (which takes almost 60 seconds to climb) and reaches speeds up to 80 miles per hour in its two minute, twenty second mile-long course.

I went on Nitro once while chaperoning a school trip in 2005, thinking it would be like either Rolling Thunder and Scream Machine, two classic, now long-gone, coasters I loved.

I was completely wrong.

Well, maybe not killed, but the experience scared me tremendously.

I ended up uncontrollably shaking and trembling when I walked off the ride, my legs like jelly and my arm muscles sore for several days later due to how much I strained them as I held onto the restraint as tight as I could.

I vowed I was forever done with the infernal contraption known as Nitro.

I shared my Nitro story with Nephew on several occasions, including yesterday when we safely sat and waited for Niece and Friend to return from Friend’s first time riding the steel beast.

Nephew is older now, and I could see the curiosity twinkling in his eye as he told me what he knew about Nitro while he watched a car roaring along its track. “It was designed by B and M,” he said, “and they have a great safety record.”

There was no doubt about it. He was ready to take the Nitro leap and I wasn’t about to let my fear hold him back.

Niece and Friend returned rather quickly since the wait time was a few minutes at best, and Friend absolutely loved the Nitro experience.

Nephew said that if Friend could do it, he could too.

All three looked at me with pleading eyes but I stubbornly shook my head. “You guys have a great time!” I said as I bid them farewell, then I walked over to where people on the ground could see Nitro’s ride cars leave the loading area. Nephew was safely seated between Niece and Friend as their car passed by, their arms flailing in enthusiastic waves.

“Bye!” they yelled in unison.

They returned 140 seconds later with Nephew wearing the widest smile I’ve ever seen on his face. He gave me a thumbs up from up on high as he jubilantly shrieked, “It was awesome!”

I knew what I had to do.

A minute later, they surrounded me as they jumped around in sheer excitement and joy. A chorus of “please?”s rose up.  Nephew looked me right in my eyes and said, “You can do it. I did it, and so can you.”

I remembered a story told by a colleague who was in a similar situation. Her grandson wanted her to go on a thrill ride with him, and her outlook was, “I can do anything for two minutes.”

Realizing that I could too, I sighed then nodded my head as I said, “Okay.”

A whoop emanated from all three as Niece took my hand to lead me to certain death.

“You’re lucky I love you,” I grumbled as we walked through the air gate to the seats in Row 4.

My pulse raced as I sat down between Niece and Nephew, with Friend to Nephew’s left. The yellow restraints locked and were subsequently checked by the ride attendants. It’s a good thing mine was secure because at the last second, I cried, “I don’t want to do this!” and I honestly would have ran if I could.

However, it was zero hour and flight was not an option.

After the “visual scan” and “all clear” over the loudspeaker by what I was sure was the Grim Reaper disguised as Nitro’s head supervisor, our car was set free. 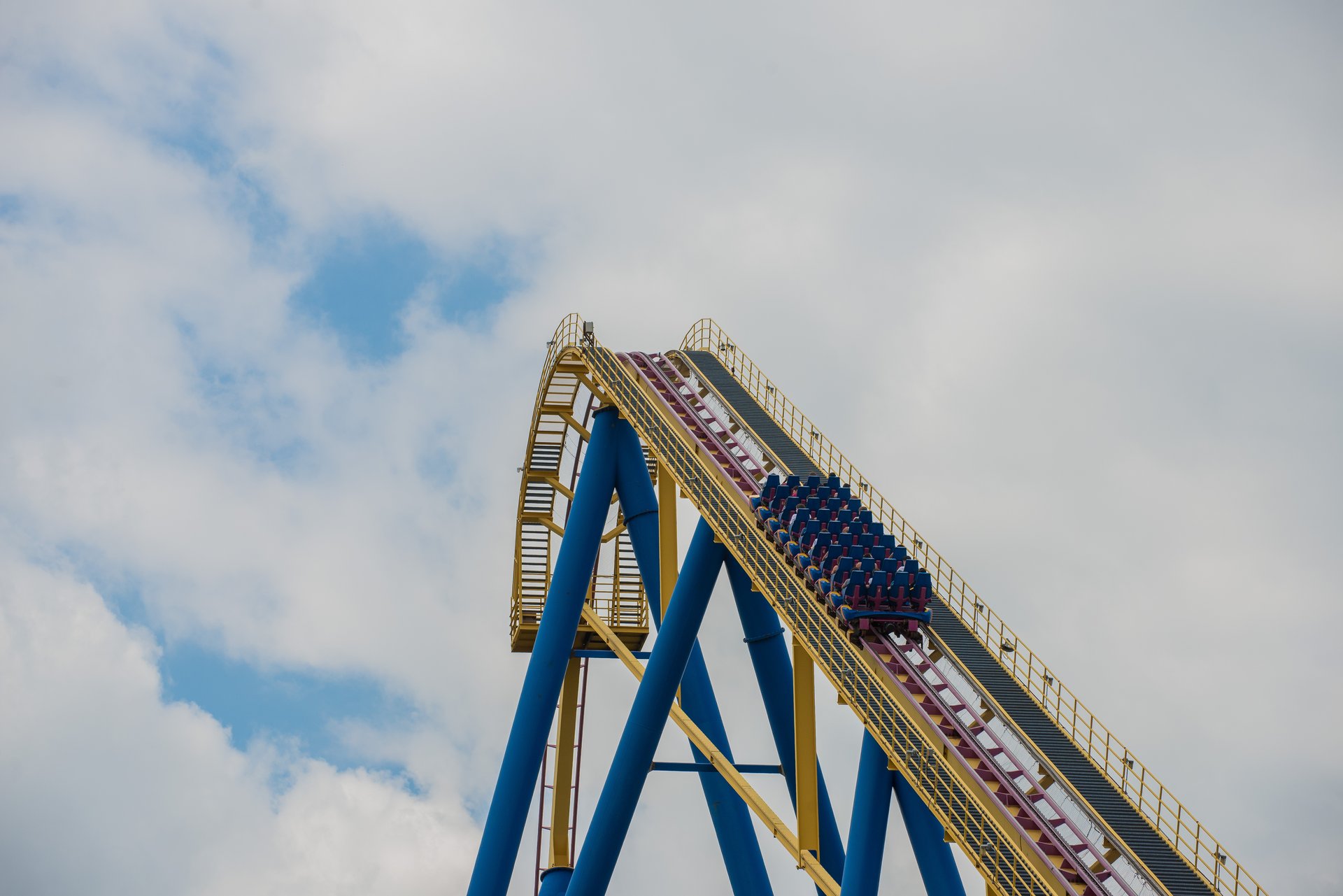 I closed my eyes and leaned my head as far back into my seat as possible. With each upward click, I squeezed Niece’s hand a little tighter. She, along with Nephew and Friend, found my reaction highly amusing. I think they were all laughing, but I can’t exactly remember because I was concentrating so hard on praying for redemption.

Within seconds, we were traveling down the 215-feet drop at the advertised eighty miles-per-hour.  I’m pretty sure my heart rate matched the number of expletives I let fly.

Towards the end of the journey to my undeniable demise, Niece yelled, “Bunny hops!!”

I opened my eyes to see the blue and yellow hilly path we were on as we smoothly rode over each bump. It was surprisingly much smoother than the Runaway Mine Train bunny hops at the end of its path, that was for sure.

The car suddenly came to a halting stop.

And I was alive.

Sure, my legs were once again like jelly as we walked off the ride, and I felt a surge of electricity pulsing through my entire body.

But it was a good energy, and I did not die.

The sleek, wicked-fast roller coaster was one of the smoothest rides I’ve ever experienced, and the sensation of weightlessness was exhilarating.

I looked at Nephew, who threw his arms around me and exclaimed, “I’m so proud of you!” Niece and friend hugged me too. “You did it, Aunt Jill!”

Somewhere along the ride route, a remote camera snaps a photograph which is then displayed for about a minute or so on the monitors at the Nitro photo kiosk near the ride’s exit. The picture of our row featured three gleeful faces with arms up in the air and one red face screaming for mercy as she gripped onto the restraint for dear life.

We didn’t buy the photograph, but I’ll be able to picture it perfectly in my mind’s eye for the rest of my life.

The unspoken question hovered in the air around us as we regrouped outside the ride.

It was answered by all four of us walking together once again through Nitro’s entrance.

Three minutes later, a photograph with four delighted smiles in our row flashed upon the photo kiosk’s screen.

“Nitro’s Check Mark“: Copyright 2018 – Jill Ocone. This post originally appeared on both the Soulseaker blog (www.soulseaker.com) and the personal blog of Jill Ocone (www.jillocone.com) on August 11, 2018. Views and opinions contained in this post are solely those of the author, who was not compensated in any way by any entity, including Six Flags Great Adventure, the Six Flags corporation, or their affiliates. All rights reserved.

Had an awesome afternoon with my nephew at InfoAge History and Science Center in Wall. Especially enjoyed their Christmas train displays! Highly recommend!
Awesome time at InfoAge this afternoon!
Grateful for everything…especially for life, for my journey, and for your role in it. Happy thanksgiving!