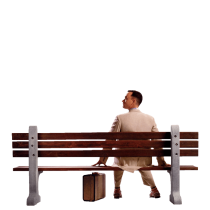 Let that sink in for a minute.

There was another 25th anniversary recently, on June 17 to be precise. This one involved a well-known low-speed police chase of a white Ford Bronco containing two former NFL players along various Los Angeles freeways after arrest warrants of varying degrees were issued for both occupants.

If you were alive, chances are you can remember like I can where you were as the chase unfolded on that warm, early-summer evening. I also remember seeing Forrest Gump in the movie theater on its opening weekend. I was moved to tears several times that night as I became engrossed in the story of a simple man who lived a big life and did the best with, as his mother said, what God gave him

Both Forrest Gump and that Bronco chase became two of the biggest pop-culture moments of the mid-1990s, each event in its own right creating thousands of trivia questions, but let’s put it into perspective for a minute, shall we?

Twenty-five years is a quarter-of-a-century, and since 1994…

I could go on…

To circle back to this post’s point, I recall with extreme clarity both where I was standing when I was glued to the television witnessing that white Ford Bronco weave along the California interstates, and how I felt the first time I viewed that white feather floating along the breeze as Forrest sat, hopeful and content, in a Savannah square.

It doesn’t seem like 25 years have gone by since either happened, and THIS is what scares the hell out of me:

If the last 25 years went by in the blink of an eye, there’s no doubt that the 25 years that lie in front of me will, too.

25 years from right now, I will be 73 years old. Not that there’s anything wrong with turning 73…I know many people who wish they could have made it to 73, and I will be psyched if I make it to 73 and beyond.

My point is this: Time just moves so freaking fast. I’ve written about this before, I know, and my intention is not to belabor the point. However, this particular example of the 25-year anniversary theory punched me hard right in my gut and made the phenomenon of speeding time all the more real for me.

To quote my very good friend Forrest Gump, I don’t know if we each have a destiny, or if we’re all just floatin’ around accidental-like on a breeze. But, I, I think maybe it’s both.

Regardless if I have a destiny or if I’m floatin’ around like on a breeze, I cannot control what happens in society but I can take control of my future. There are a lot of miles to cover on the freeway that lies ahead of me and I look forward to many rest stops filled with meaningful, wonderful, and memorable moments.

Thanks for joining me on my journey. I’m glad you’re here.

Current view
The kids are alright: A great one distributed today created by 72 hands and 360 fingers. Their success. Not mine. 💙💛💙💛